How to use functions and polygons to create a stripe pattern

I need to create a stripe pattern made of polygons because I am making desmos art, and it needs to scale when you zoom (I tried a sine wave with a domain restriction and it looked weird when zooming in or out). Everything I have tried has resulted in a “You cannot nest lists” error. 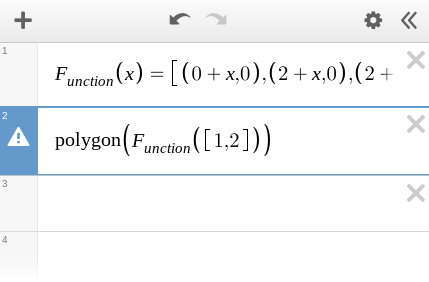 The polygon function takes a list of points, and you can’t use lists within lists, so that won’t work. How’s this instead?

I can use this. Thanks!

something like this will scale infinitely, as it uses those sin’s and cos’s you were originally talking about: Graphing Calculator

I’ll add another possible solution. Although it’s not infinite stripes, it does use the polygon tool and lists. I had these functions saved to make custom bar graphs, but it works in this case too.

That looks amazing and does use polygons. I will consider using such a design in the future!