Cl for a graph inside of a choice?

Is there a way to add CL for a graph that is contained within a choice option?
I want to randomize a question, and with that the graph will have to be adaptable to the randomization. One work around is what I have done in the attached picture where I just have four different components. 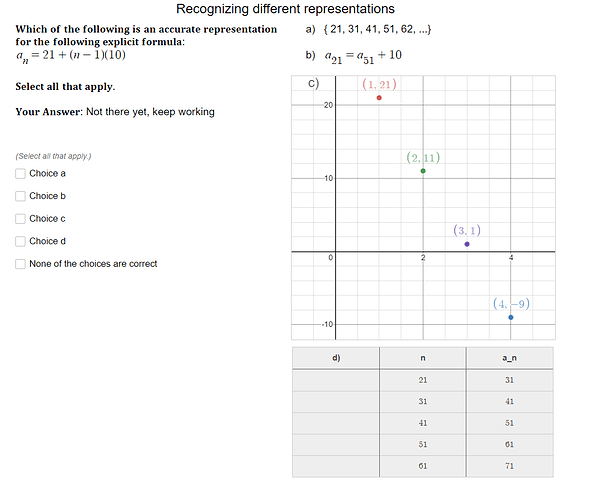 The problem is that 4 graphs take up an enormous amount of space and I dont want to tell students to zoom out on their page for just one question. I would like to either figure out a way to force the graphs to be small, or figure out a way to add CL for a graph while it is contained within an multiple choice option. Any ideas?

I just was doing something that had the same need!
I want to be able to provide multiple choice graphs based on decisions they made on earlier screens.

Sorry I have no answer.

If it was a matter of double level CL in one content, I would even be ok with the idea of making 4 hidden graphs and then the choice would display the graphs. That way the graphs hold the CL and the choice is just pulling the display of the graph.

If I can make a slide that has 16 different possible outcomes for each choice, all randomized, Id like this graph thing to happen lol.

Here’s the screen - I’d like to be able to define the angle of the right triangle based on previous choices.

Which Tri • Activity Builder by Desmos

That is a perfect example! Would be great to have that be randomizable instead of having to construct different questions each time. Or like you said, have it change based on previous inputs.

If there was a way to reduce the size of graphs to the size they have when they are in choice form, then you could create four graph components, label them a-d, and then set up a multiple choice that correlates with the graphs.

I asked this same question, but your work around of 4 graph components made me think of a workaround. You can use a single graph component and use each quadrant as its own grid. You just have to transform the functions you randomly generate.

I didn’t write the random generator because it sounds like you have no problem doing that on your own. Maybe something like this …

I am not sure of what your exact need, so these might also be helpful as well

I never thought of that. Would take some work, but it is an interesting idea. I am going to have to dig into that.

How’s this? I took a screen snip of the Desmos graph and used that image in the graph. You’re stuck with the bounds as is unless you want to take new screen snips and tweak values and functions.

THAT IS PERFECT! Thank you for that example. It is way better than what I could have thrown together!

Thanks. You lose dynamic bounds, but visually I think works better for students.

Well it helped me write a randomly generated graphing question (#9)

So, I appreciate it. The graph image and highlighter is cleaner than what I had thrown together.

I’ll have to borrow that from you when I hit inequalities. That’s a great implementation his split graph

I am playing around with it but could use some input. I have it set up with a first quadrant graph. I have the origin moved to the new spot, and when I put in equations like 4x, or 2x it seems fine. When I change the y-intercept it only moves half the distance of what I put in. What would fix that? (I’m only messing with graph A currently)

Got it working. Quadrant 1 graphs that randomize

probably was an easier way… but oh well

Got a chance to finally use that graph. Check out slide 10 on this link