I’m trying to write a Graphing Stories exercise that will contain complicated conditional feedback based on each part of a student’s response. The student will create a piecewise function, eventually containing up to 5 line segments, and I want to generate a student facing response for each line segment, telling the student if they met the criteria for that segment.

This may seem more complicated than it has to be, but it’ll be really helpful to me since in the long run, each screen will randomly pull one question from a number of possibilities, and writing separate checks for each possibility will be difficult. I’m hoping to just write the plain-language criterion I’m trying to check (in the instance above, that’s whether a_0=b_lue, but in other instances the criteria could be something like m_2>m_1), and have the code check it for correctness.

Am I making a mistake in this code? Thanks.

This code is in the graph of Screen 3 of the activity below. To experience it, you first need to do Screen 2 and then move on to Screen 3: 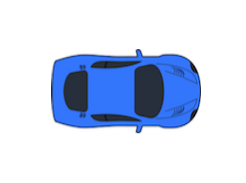 A car's speed is visualized as the slope of its position-time graph. Students create their own piecewise linear position-time graph, and a car automatically drives to match the graph. This activity was inspired by an activity created by John Golden,...

Looks like you’re trying to create a boolean command by taking two numbers, creating a boolean command, interpolating it into a piecewise function that outputs a boolean value? Seems inefficient, but I may be mistaken.

As far as I can understand a_0=b_lue and m_2 > m_1 are correctness conditions. Are the parts of these CL based scripts or numbers in the graph?

If they’re variables in CL and you want to perform a single check like a_0Correctness = (the thing) you can achieve a boolean correctness output just like this:

If these are variables in the graph, its best to just perform these calculations in graph and reference the numeric output of the piecewise function in CL.