I am trying to make a combining like-terms activity self-checking but have never coded a self-checking math input with more than one-variable in the expression. For example, slide 1 simplifies to 11x+5y. I found some past posts with multiple variables that checked using a quadratic function but I’m wondering if there isn’t something easier I can use. Does anyone have something I can copy…any insight here is much appreciated!

Screen1: Tried using patterns but couldn’t parse the two parts of the sum separately, @Jay, can you comment on fixing screen 1 here?

Screen2: separated the two parts into two inputs and had Demos recombine for final expression

Students work through a scaffolded activity to combine like terms. They start by sorting like terms into groups, then combine to simplify the expressions. Lastly, they complete two "open middle" type challenges to create their own equivalent...

term1.latex will pull the first arguments in the sum pattern. Altogether it’ll look like this:
part1 = exp.parse(ref.latex).term1.latex

The tricky part here is that because you’re allowing any expression as the first term, it’ll recognize anything that is separated by the “+”

Here’s where you can parse/match the sub string to check that each term is a letter, a letter times a number, or a number.

The -y presents a different problem, where a student that enters something like 3x-y won’t have it match the sum pattern. But thats just a matter of adding some flexibility to the match pattern.

Thanks for responding…I tried what you wrote but as you said, it’s reading as correct before the y is even typed in. Do you know of any other templates for this that I can try and copy or do you have an idea? Thanks for the help.

I took what you had originally and added to it. I think if you use patterns, it will be several lines of code as well. I checked the input against the intended expression 3 times with some random inputs. Make sure to mark the graph as readOnly. 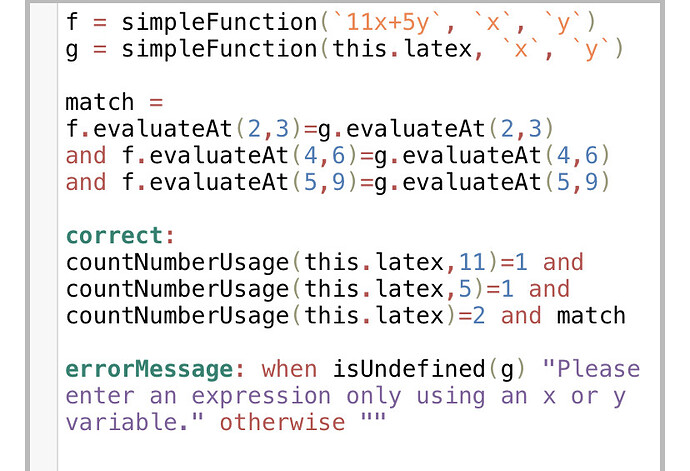