I was recently trying to create every letter in the alphabet in desmos but using one big piecewise function for each letter. I was delighted to find that I can use lists inside of piecewise functions in order to create multiple lines in the same x domain. I didn’t get very far however, because when making the letter “A”, I encountered a strange problem where the entire function would simply stop being graphed without even an error message when I simply added a number to one of the lists. I know that lists can be picky when it comes to having different amounts of numbers than other lists in the same equation, but I don’t think I’ve done anything like that. I even tried using the same list but in its own smaller piecewise function and it worked perfectly as expected. I tried copying and pasting, and thoroughly checked for typos in all of my equations.

Here is a link to the graph: 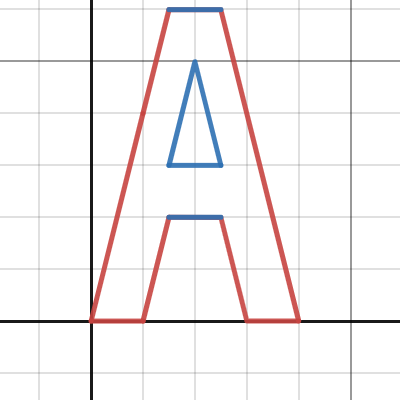 The red equation is able to graph the entire “A” except for the middle triangle for some reason. I was unable to get the x=0 lines to graph without the whole thing disappearing. As you can see, the blue equation graphs exactly what I wanted. To get the error condition with the red function, add any number to the list [2,6] that is in the middle of the equation.

Thanks to anyone who can help! I’d love to find out that I just made a simple error somewhere and everything is working as expected.

We can’t plot a list where the length depends on a free variable, which means we can’t plot lists where a condition using a free variable determines list length. We’ll let you define it but will show you an error when you try to plot it:

Normally we just automatically plot f(x) = whatever , without forcing you to add a second expression like y=f(x) . But if f is non-plottable and a non-error, we’re just “silent” until you try to plot explicitly.

In this case, making all of the lists the same length solves your problem: https://www.desmos.com/calculator/1l4e5n51fx