Aggregating values from a graph

I have a value (“a_score”) calculated in a graph (G1) that comes from a calculation done on an aggregated numberList (S) based on student input to a table. I am looking to carry over these values to the next graph (G2). To do this, I have tried to define a numberList for G2 as numberList(U): aggregate(G1.number(“a_{score}”)).

It does not seem to like this as I can’t get anything to show on my graph - I have tried simply plotting a point (U,1) and it won’t work. I’ve had previous success with aggregating numbers from a table and showing them all on one graph so I’m not sure what the issue is here.

A link to your example would be helpful.

Are the values of (U,1) within the bounds of the graph? So, maybe present just not visible? Also, shouldn’t a_score be the same for each student if it was calculated by the aggregated list (S)? Meaning there would only be one point for (U,1)?

My activity is a bit convoluted, I’ve linked it below. I checked the bounds and it should be fine, and have tried to run simple test slides, none of which work.

I changed my variable names in the post above from what I had in the activity to be a bit easier to follow, but essentially I’m looking to take the variable s_core from the graph Q1_score and create a sink, s_p, on the seventh slide graph, Q2_score. Then, the graph Q2_score should calculate a new s_core variable by adding the s_p value and plot it. Everything works except the addition of the previous score.

Thank you for the help!

Before we get too far into the details, have you tried making a class code and using sample students? Sometimes aggregate misbehaves a little in preview. 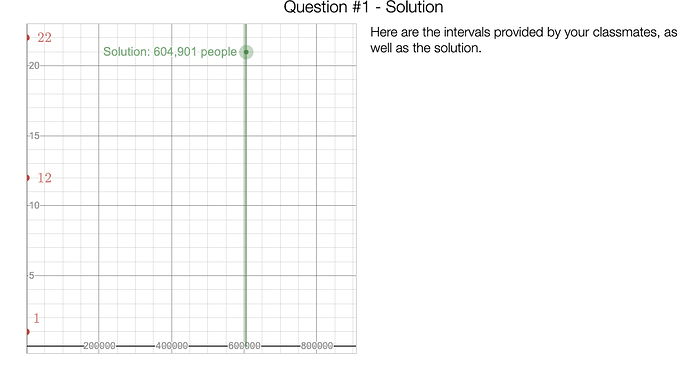 Looks like its working? Not sure if the visual is what you want, but the aggregation itself seems to be hooked up fine.

I’ve been making sample classrooms to ensure everything works, but I may not have made one since I added the second question.

I’ll have some time to do that soon, I’ll try it and report back.

Hi again Jay, all of the aggregations except for the one on slide 7 are working. For whatever reason, the s_core variable doesn’t like the addition of the aggregated numberList s_p. I haven’t been able to think of a workaround to this. Right now I have conditions set on s_core but I have tried it without the conditions in case that was the culprit and it still didn’t work.

I have also tried just plotting a point (s_p, 1) on the graph and that doesn’t work either.

If you have any insight that would be great!

It seems that I got it to work - I think that s_{core} becomes a numberList since it is generated from two numberLists. I created a separate variable in the graph calculated only using numbers and it adds fine.