Dashboard does NOT update until student advances

I’d like to use the Dashboard to see when a student has made the correct response, so I’ve done all the usual setting of readonly: and correct:
However the Dashboard isn’t updating until the student moves off the screen 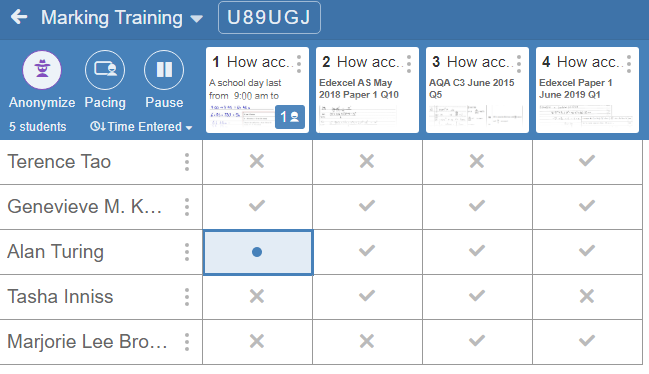 Is it possible to have the Dashboard update as soon as the student clicks submit?

It may just be that the updates were being a little slow. The default behaviour is, I believe, for the dashboard to be a “live” reflection of whatever’s on the student’s screen at that point - they should not need to move on to the next slide (in many cases there isn’t a next slide) in order to update.

There are many factors at your end and at Desmos’s end that might lead to a slower update, but I do not think it is needing to move onto the other slide.

Thank you for sharing this resource though - it was fascinating to follow that thread on Twitter and see the amount of disagreement in the marking!

Did Alan Turing have an incorrect answer on screen 1?

The dashboard will immediately update to show a correct answer on a screen, but won’t mark a student incorrect until they have moved away from that screen. This is to prevent “in progress” responses from being shown as incorrect.

. It’s the fact that the dashboard shows different behaviour for correct and incorrect responses that was confusing me.
Alan Turning’s response was incorrect in this example.

but sometimes the dashboard goes blank, see this video when a student enters a response of 4

Looks like the typical delay in the update. I see that you blanked out the input for a while causing the dashboard symbol to (after a delay) revert to blank, and then entered a 4 which then took longer to update, by which time you’d changed the input again.

I wonder if my slightly crude error check is causing the slow response?

It might be contributing to it, but I doubt it. Its more likely being affected by internet speed.

I checked it on my machine and there was a delay, but not quite as long as yours. I also did a few optimization things like removing all but one screen, removing the aggregate, and simplifying the calculations to just compare numbers instead of converting them to strings first (e.g. this.numericValue = 4 instead of this.numericValue = numericValue(`4`)), which had a very small effect but not anything really noticeable.

Great suggestion. I hadn’t realized that was doing a string conversion, so I’ve updated on all the screens. As a bonus it makes the CL more readable

There’s also the train of thought that says prevention is better than cure… so you could use multiple choice options labelled 0 through to 4 (or whatever the max mark is), removing the need for any sort of sanity check and - presumably - introducing the bonus that the dashboard should update immediately rightly or wrongly as soon as someone chooses an option.

so you could use multiple choice options

See screenshot below. However I switched to the Math Input box to save on screen space as the lovely bar chart wasn’t visible without scrolling.
It would be nice if the multiple choice options could be listed horizontally or vertically but I couldn’t see an option for that. 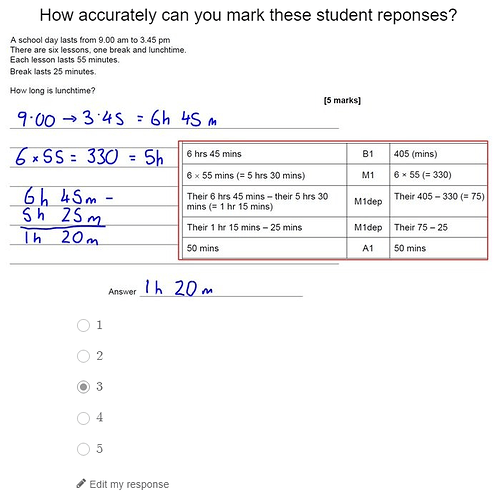 The super fancy way of doing this would be to have a checkbox next to each mark so students could indicate which marks they were awarding rather than just the total, e.g. B1M0M0M0A0 or B0M1M0M0A0 which both total to one, but award marks for different skills.

It would be nice if the multiple choice options could be listed horizontally or vertically but I couldn’t see an option for that.

It would be nice if the multiple choice options could be listed horizontally or vertically but I couldn’t see an option for that.

The three-dot menu gives you options for how you want the choices laid out:

Basic buttons and toggle buttons should both condense to one line (you can also control with maxButtonsPerRow in the CL):

I didn’t know about maxButtonsPerRow. Thanks!

We’ve really got something great now. Thanks

I’ve changed the layout for Q1 only to checkboxes in a horizontal row.
That way the student can indicate exactly what marks they are awarding.
The CL to total the mark for the question isn’t the prettiest but otherwise I’m super happy with this result. Thanks everyone for really helping to improve this activity 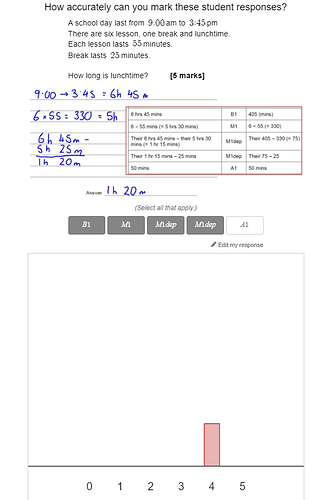