Is it possible to show the list of values in a note collected from aggregation ?

I am not sure if this is possible in a note. Usually you use “script” to point to a variable, but I do not think it accepts number lists.

I did make a workaround for having it populate a graph. Although, this would be tricky depending on how many participants you have.

This is really helpful for something I’ve been trying, but like you said, it doesn’t work well if you have several submissions. Right now, I have an aggregated list that will order numerically. Is there a way to get the calculator to display the list in, let’s say groups of 5 or 10? I could set the bounds to fit the data in the screen, but I think the numbers would get jumbled together after so many submissions. 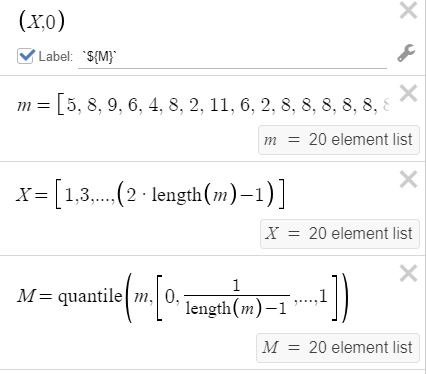 It’s currently not. One option for now is to show it in a graph exhibit by using numberList("L"): aggregate(...), and then using the values from the list in point labels, like List Labels

Sure, you can make subsets by pulling specific elements from the universal set. Say X has potential to have 40 numbers in the aggregate. Then you make lists X1 … X8 where X1 is the first 5 numbers, X2 is the next 5 etc.

Or if it is easier to use individual elements instead of subsets you can literally plot 40 points and have the 40 labels be {X[1]}, {X[2]} etc.

I added a second slide to my earlier demonstration. This is essentially saying the same thing as Eric, but then creating multiple lists since we can’t fit 40 numbers on a single line.

Hope this was somewhat clear.

That is correct. Referencing your screenshot you would probably use M[1]. The bracket is just the notation Desmos uses to denote the index.